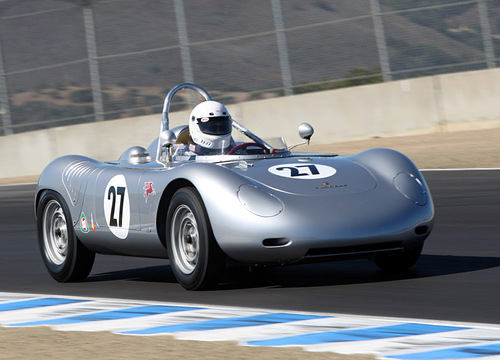 Porsche 718/2 RSK Spyder
Porsche’s first purpose built racing car, the 550, still shared many components with the road cars of the marque. Particularly the steel platform chassis prevented the small Spyder of living up to its potential. It was nevertheless a highly successful racing car, which could only get better as Porsche launched its replacement with a more sophisticated chassis and running gear early in 1956. Simply known as the 550A, in the hands of Umberto Maglioli the new racer lived up to its expectation by scoring an outright win in the Targa Florio, whereas its predecessor used to be in contention only for class wins.

Compared to the original 550, the biggest step forward was the new spaceframe chassis. Consisting of many small diameter tubes, the chassis was considerably lighter and as much as five times stiffer than that of its predecessor. To cope with the stiffer frame, the suspension was also reworked, although it still followed the traditional Porsche lines. At the rear the swing-axles were considerably lowered, eliminating many of the negative characteristics of this type of suspension. With the chassis so much stiffer, the body did not have to carry anymore load, so it could also be lightened considerably. Its design still followed that of the original, but the 550A can be easily distinguished by a louvered hatch on both sides behind the cockpit.

During the development of the 550 most of the time and resources were spent on developing the Type 547 engine. The small four cylinder boxer with four tiny camshafts had performed really well, but Porsche engineers felt there was more left. A major development was moving the drive for the distributor from the intake camshafts to the crankshaft. Other improvements were fitting two Weber carburetors and raising the compression. The Type 547/2 as the engine was known produced 125 bhp early in the year and towards the end of the season a reliable 135 bhp could be attained. Torque was also increased considerably from 120 Nm to 145 Nm. The engine was mated to a five speed gearbox and mounted midships in the spaceframe chassis.

Still unpainted and virtually untested, the 550A was first raced during the 1956 Mille Miglia, understandably with little success. The German debut came during the 1000km race at the Nurburgring where two 550As were entered. They finished fourth and sixth overall, taking a one-two class win in the process. For the 24 Hours of Le Mans, two new cars were constructed, fitted with a fastback roof similar to the one fitted on the first 550s. One car retired, while the other finished fifth overall and first in class. After a successful debut season, Porsche commenced limited series production of the 550A for customers. In 1957 the factory continued development of the Type 547 engine and several versions with different displacements were constructed for use in hillclimbs. The largest was the Type 547/5 with a displaced of nearly 1.7 litre.

For the 1957 season all eyes were back on the chassis and body once more. Following the lines of the experimental low-drag ‘Mickey Mouse’ spyder a new body design was penned. It was both lower and smoother than that of its predecessors. Under the aluminum body there were several more detail changes. The front trailing arms were relocated to improve the suspension dynamics; the camber of the front wheels would now increase as the wheels moved upwards. The changes required the steering box to be mounted in the middle of the car. The much lower front frame resembled the letter K if looked at from the front and the new version was commonly referred to as the ‘RSK’. The internal name for the new car was the Type 718. 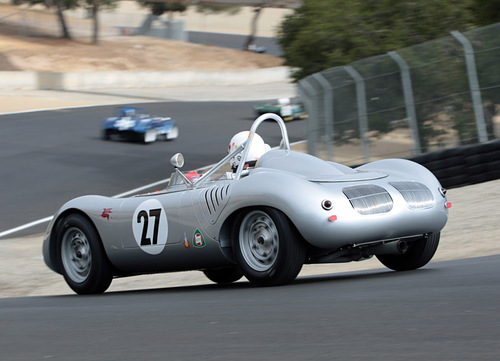